The photons from the laser beam interact with the molecules and excites the electrons in them. The excited electrons are in a “virtual state” which is not stable, so they immediately fall down to the ground level. As electrons lose energy and fall down to the ground state, they emit photons. There are three different scenarios of how light can be re-emitted after energy had been absorbed by an electron: 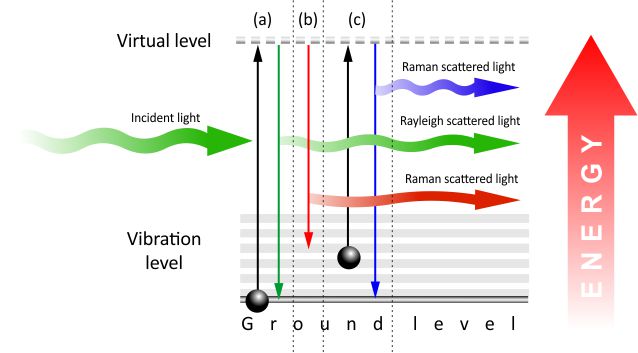 In any case of Raman scatter, the energy change relative to wavelength of the photons can be spectroscopically detected as a colour change and is characteristic to the sample being investigated. The output of Stokes and Anti-Stokes scatter measurements is called a Raman Spectrum. Because Raman signal is quite weak, one of the ways to enhance the intensity is SERS (Surface-Enhanced Raman Spectroscopy). 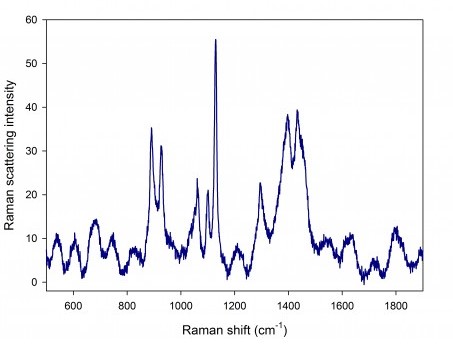 In Raman spectroscopy, wavenumber (measured in cm-1) is used instead of wavelength to characterise light. Wavenumbers are convenient to use, because they are linearly related with energy and independent of excitation wavelength. For example, the Raman peak of diamond is always at about 1332 cm-1, no matter what the excitation wavelength is. That is why every material has it’s own unique Raman spectrum by which it can later be identified.

Since this process is non-destructive and does not require direct physical contact to the sample, it allows fast chemical analysis of solids, powders, liquids and gases. That is why Raman spectroscopy can be used for various applications, such as: carbon science, material analysis, microscopy, pharmaceutical, forensics, food fraud identification, chemical process monitoring, homeland security and many more. Because of the compactness of our lasers, they are a perfect fit for portable and hand-held Raman devices.

As Raman spectroscopy requires monochromatic light as an excitation source, it is best to use single longitudinal mode (narrow bandwidth) lasers for this application. Most often used wavelengths are: 405 nm, 488 nm, 532 nm, 633 nm, 785 nm, 830 nm, 1030 nm, 1064 nm.  Integrated Optics supplies continuous-wave (CW), single-longitudinal mode (SLM) lasers with all the mentioned wavelengths for a competetive price.. SERS substrates are made by our partner Ato ID and can be found in our website as well.