The main phenomenon behind photoacoustic imaging is the photoacoustic effect. First discovered in 1880 by Alexander G. Bell, was the appearance of an acoustic signal from an object, which was being illuminated with light. In practice, a source (most commonly a laser) delivers light pulses to the sample, the energy of which is absorbed by the sample tissues. The extra amount of energy translates into thermoelastic expansion since the light pulses generate a slight temperature rise (usually about a few millikelvins). The outcome is acoustic or ultrasonic waves, that are later on converted either into an electric signal using an ultrasonic transducer for single-spot measurement, into a 2D or even 3D image by using an array of ultrasonic transducers or sophisticated holographic images by utilizing high-coherence lasers. This type of imagery can be modified in various ways, to reach the maximum efficiency for the specific case.

Most often this system is used as a biomedical imaging modality. Since the sample comes in contact only with the light waves and doesn’t require any other operations, this technology promises a non-invasive way to study biological tissues. The non-ionizing laser pulses keep the inspection of tissues safe and non-threatening. The main chromophores that receive the most attention due to their high optical absorption at the excitation wavelengths are hemoglobin in the blood, water, melanin, and other lipids. Since the detectors in such systems measure the photoacoustic pressure signals, the generated images can be used to specify the functional properties of the sample (detect the present substances and their concentrations) as well as its geometrical structures.

Other studies can benefit from the PA effect such as the studies of small-scale gas samples or inspection of object surface defects invisible to the naked eye or hidden cavities within the bulk of the material. PAI might be useful in studying various gas concentrations and their properties. Since the photoacoustic effect does not require any physical touch, the system remains unchanged. Since various substances (i.e. gases) have different absorption spectra, PA becomes a useful tool in spectroscopy measurements. Other types of studies such as object surface defects can be noticed using such a method. Various types of materials can be inspected (metal or plastic surfaces, various fibers). Micro-scale cracks, cuts, and dents can be observed by using the discussed technique. This can be widely used in product quality control, in mechanical parts that require great accuracy (medical metal needles), thus decreasing the production costs.

Photoacoustic imaging takes advantage both of the optical and ultrasound properties of this system. The optical part provides a high image resolution. The wavelength-dependent optical absorption is the underlying contrast mechanism in PAI. The obtained PA image represents the initial pressure distribution produced by the deposition of the optical energy. This directly correlates with the absorption of the sample and the laser pulse energy. Therefore, the wavelength of the source laser must be selected according to the given sample. The acoustic part provides greater depth penetration compared to the laser radiation. Since little acoustic scattering occurs when applying the PA effect, it allows constructing images of objects set deeper than the surface of the sample. The depth-dependent information is closely linked to the absorption properties of the medium. This method is also free from the speckle effect which typically comes with the use of a laser. A speckle pattern appears when a laser beam hits an uneven surface and reflects in a non-uniform way and the distorted wavefront causes interference of different parts of the reflected beam. This phenomenon is avoided since no reflected light is being detected. Therefore, the only scattering that occurs in the process is the acoustic scattering, which is significantly less intense. High contrast and axial resolution is also defined by the bandwidth of the detector. A larger frequency spectrum creates a system that is more sensitive to the generated signal, therefore more accurate data is collected.

The break-down of the process 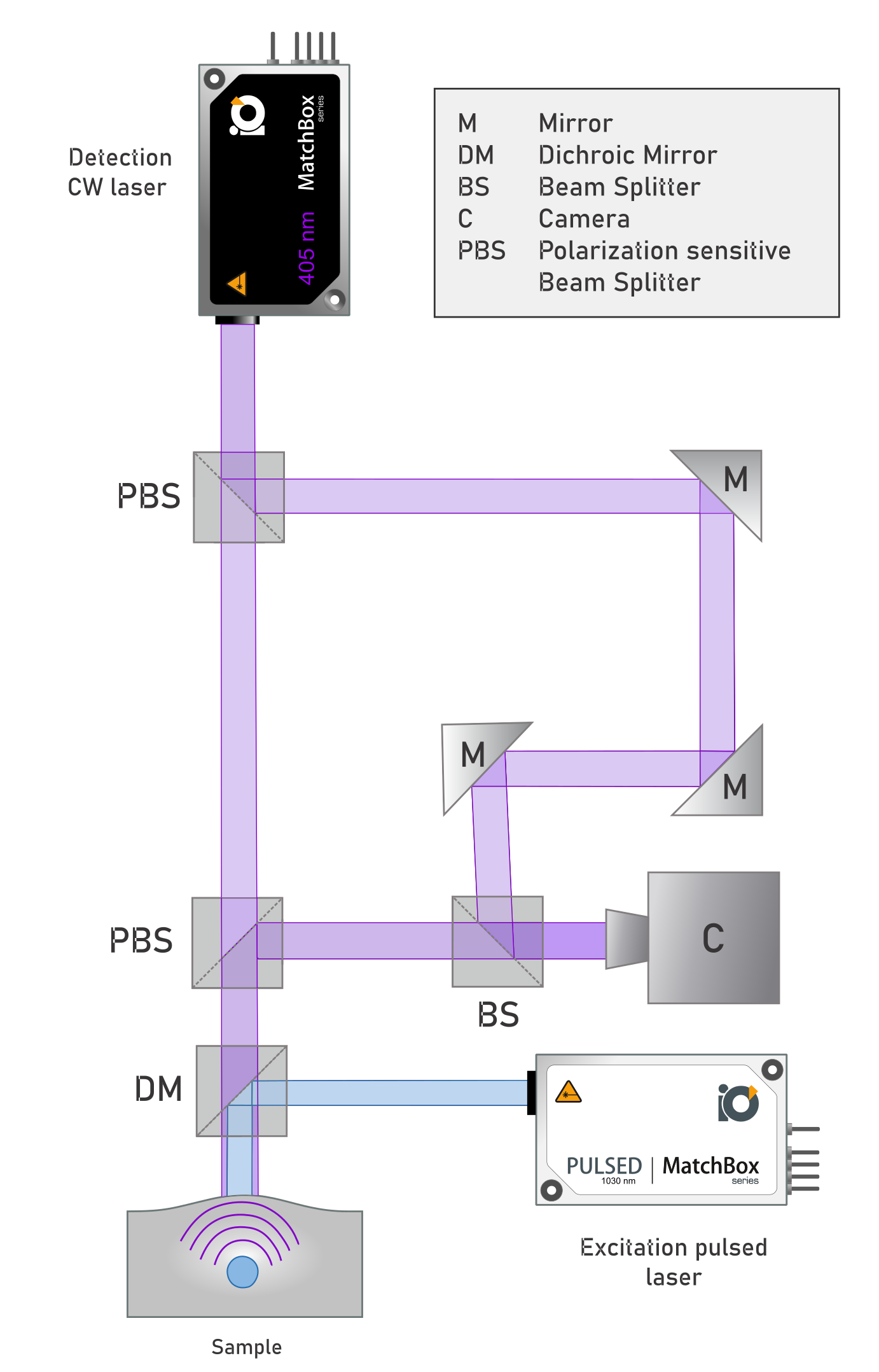 A laser is usually used to act as the light source in a PAI system since it can produce uniform (defined energy) light pulses, that can be of various frequency, power, and wavelength. A time-invariant lightwave doesn’t induce the photoacoustic effect, which means that only specifically pulsed lasers can be used as an excitation source.  The characteristic of the light source must also be delicately adjusted to fit within the safety measurements if the experiments are carried out in vivo. Since the photoacoustic technique is mainly used for research in live biological tissues, it is important for the method to cause no harm to the specimen. The established safety limit – 20 mJ/cm2 at 532 nm.

The light pulse must also be shorter than two sample characteristics – the thermal and stress confinement time constants. These constants exhibit the time required for the heat and stress to spread throughout the sample structure. The time values may vary respectfully to different mediums. With the help of optical lenses, the laser pulse is converted to an expanded beam. This form of light is commonly used to excite the specimen. It should also be mentioned, that the beam must also be collimated – the waves must be parallel with each other to prevent light scattering. The pulse can be carried through an optical fiber to ensure, that the waves that reach the specimen are in order with each other and their properties remain the same pulse-to-pulse. Narrow spectrum (Single Longitudinal Mode - SLM) passive Q-Switch lasers feature particularly stable pulse energies – this is a well-known effect determined by saturable absorber crystals used in the cavity. However, high pulse energy levels, which are desirable for high-throughput PA screening, are easier to get with active Q-Switch lasers.

Later on, when the energy has already translated itself to ultrasonic signals, acoustic lenses collect the acoustic waves and determine the acoustic source distribution. The detector maps the electromagnetic energy deposition functions, which can also be interpreted as the absorption properties of the examined material. Laser holography also functions as a detection system. A detection laser emits a light beam, which is firstly widened with the use of a lens and later split into two separate beams. A beam splitter or a semi-reflective mirror creates an object beam and a reference beam. Firstly, the object beam illuminates the sample, afterwards, the reflected light is redirected and laid on the reference beam. The rough sample inevitably creates a speckle pattern in the reflected light beam, which shifts accordingly to the thermoelastic expansion of the tissue. The interference of these two beams creates a holographic signal. The last, widely used approach in collecting PA signals is the interferometric method. The information about the object is received by analyzing the phase shift of the reference light beam and a probe light beam. The collected light can be analyzed according to two characteristics. Homodyne interference occurs with the beams that have the same frequency, while the off-phase waves create an intensity modulation of the detected light. In the heterodyne mode interference occurs between waves with different frequencies. This, much like in the holographic method, creates a pattern, that correlates to the physical changes in the specimen. The most common detection laser wavelengths are 405 nm, 488 nm, 532 nm, or 633 (638) nm all being narrow spectrum (single-longitudinal mode). Wherever possible, the bulky and hard-to-maintain gas and DPSS lasers are exchanged for diode-based compact units, if only the required coherence length and output power requirements are met. Read more about HeNe and SLM diode laser comparison.

A variation or a type of this kind of product – photoacoustic microscopy (PAM), which uses focused beam-based image formation. Often a cross-section image can be produced when the specimen is penetrated deeply through the layers of the tissue. PAM offers a high-quality image with a scale resolution of microns. It uses a single ultrasonic transducer to convert the acoustic wave to an electric signal.  Photoacoustic tomography (PAT), on the other hand, uses reconstruction-based image formation. In this method, an unfocused light beam Is used to excite the specimen, while several acoustic lenses disposed in different positions collect the ultrasonic signals and compile the desired image. By using an array of different shaped transducers a multi-plane detector is created.

The best type of laser to use in such a mechanism is a nanosecond laser, higher frequencies such as in a femtosecond laser can be dangerous – in some cases, it could even ionize the materials by causing multi-photon absorption. The ideal laser for biological samples also has low energy – so as not to harm any live tissues, however, there are fewer limitations for non-organic samples. The pulse property of the laser must also be achieved – this requires a rapid on/off modulation which requires a trigger source. It is most common to use a digitized trigger source. Higher frequency modulations (>10kHz) are ideal since they are able to produce more image frames over the same time frames.

Other, alternative ways to achieve laser pulses are available. It is possible to modify the intensity of the continuous wave laser pulse, thus receiving pulses only in the desired frequency range.

A nanosecond laser is ideal in most cases of photoacoustic imaging. One may use a single-wavelength, a multi-wavelength, or a tunable-wavelength light source, according to the carried research. For example, a multi-wavelength source, constructed by using several lasers with different wavelengths, might be useful if the sample changes its characteristics over the time of research or in order to excite different chromophores at desired temporal patterns. Wavelength-tunable nanosecond Q-Switch OPO (Optical Parametric Oscillator) lasers are particularly versatile in PA research.